Huge congratulations to the performers from this year's school show, Chicago.  Our young people demonstrated their outstanding talents during their three shows, to a packed audience.

Making Music with the BBC!

Last week S3 and S4 Drama students took part in a project with the BBC called ‘Music Video’.   They had to devise and produce a video that would accompany the hit single ‘Fake Smile’ by James Bay.  In only two days the group finished their video while learning about recording and editing techniques in the process.  We think the results are fantastic!’  You can view the finished video by clicking here! 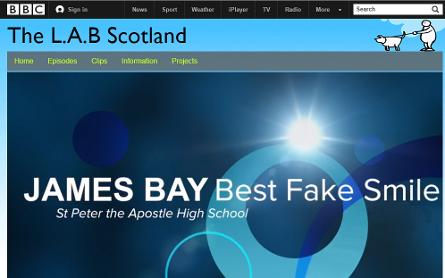 As part of the 70th Anniversary celebrations of the Citizens Theatre Dominic Hill -Artistic Director- asked the Paisley born artist and playwright,John Byrne,  to revisit his iconic work ‘The Slab Boys’with original cast member David Hayman in the Director’s seat.   I was lucky enough to join the Higher Drama class of St Peter the Apostle’s High School for a performance in the first week of the run.

Part of the higher drama exam requires students to write a review of a live performance and Byrne’s revived classic was their chosen text.  As a National 5 Drama student I was really keen to enhance my theatre production knowledge for my theory paper in Aprilbut I also wanted to develop greater theatre appreciation for the Higher course.  Generally I come to a play with little background knowledge of the plot; however the hype createdby the multitude of posters in Glasgow city centre, gave me great expectations of the show ahead.

The Citizens Theatre itself is very impressive.  It was founded in 1943 by one James Bridie and has continued to grow and develop and is now considered one of Scotland’s leading arts venues.  The building itself boasts some beautiful Victorian architecture, one incredibly detailed roof and a five hundred strong auditorium.  I would say that the venue was as impressive as the play itself.

‘The Slab boys’ revolves around the antics of the two main protagonists Phil McCann –played by Hayman’s son Sammy and George ‘Spanky’ Farrell played by up and coming actor Jamie Quinn.  The two budding slab workers make their pitiful living from grinding gum Arabic and powdered paints for the designers of a 1950’s Carpet Factory in Paisley.  Both boys and their long suffering pal ‘Hector McKenzie’-played by Scott Fletcher, dream of getting out of the slab and onto ‘desks’ with the promise of better conditions and wages.  Throughout the play we are introduced to a great mixture of characters who find themselves falling victim to the witty and brutal humour of Phil and Spanky.  Although slap stick, physical humour dominates the play, there are darker tones throughout. Phil talks of his mother’s mental health and when Phil torments Hector and decides to give him a make-over.However, even when Phil’s ambition to enter the Glasgow School of art is destroyed, both himself and Spanky manage to retain the epigrammatic style of humour which ensures that the pace drives forward.

I thoroughly enjoyed the play and was particularly impressed with the set designed by Byrne himself.  The entire play takes place in the slab room and the walls are strewn with clumsy graffiti and a monochrome drawing of James Dean.  Infront of the room is a corridor were the other characters enter from and it allows the audience to take in their walks and mannerisms which really enhances the comedy, as we see how they feel before they enter the slab room  and after escaping the assaults of Phil and the boys.  I was also amazed at the production team’s ability to take the audience back in time to the 50’s through the costumes and hair.  The drain pipe trousers, ‘duck arse’ haircuts and the beloved ‘Bubble boots’ that the boys covet really brought their world to life.

My fellow classmates felt the same about the play, Ashley Carrick of fifth year stating that

“The overall performance was great!  The comedic timing of Jamie Quinn playing ‘Spanky’ never failed to disappoint and I particularly enjoyed Kathryn Howden’s performance as the irrepressible Sadie the tea lady.”

Judging by the howls of laughter emitting from the crowd throughout and the great uproar of cheers at the end, the rest of the audience enjoyed it as much as I

The play’s run in Glasgow has now finished and will show in the Kings Theatre Edinburgh from the 10th of March until the 14th.

Our Drama students have recently worked with the Scottish Youth Theatre, examining some of the issues of World War I.

This workshop was arranged in the run-up to the special commemorative concert at St Peter the Apostle High School, which will be taking place on Tuesday 11 November. 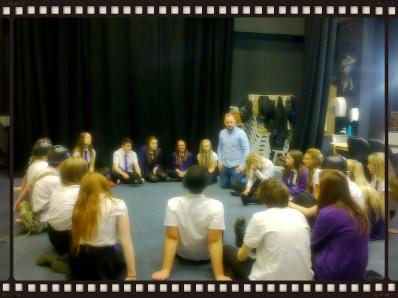 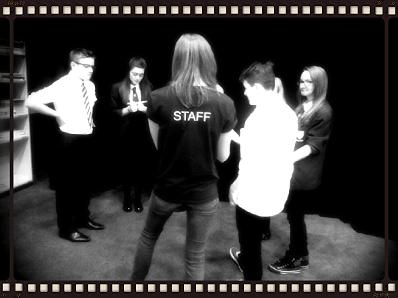